The capital of Portugal is known not only for its rolling hills and beautiful views, music festivals and vibrant nightlife. Lisbon is a gourmet paradise. The excellent quality of the products, new ideas combined with traditions, a tendency to experiment with leading chefs, a wide selection of local wines – all at surprisingly affordable prices – attract connoisseurs of delicious food from around the world. We tell where to satisfy hunger in the Portuguese capital. 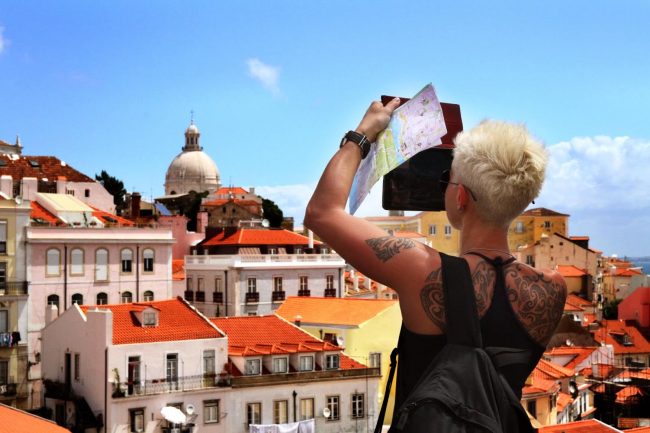 Gastronomic Lisbon: where to try the author’s menu and where to go for lunch and dinner

Fine Portuguese cuisine at the restaurant Belcanto (Largo de São Carlos), opened its doors in 1958. Since 2012, he has been run by Chef Jose Avilles, who received the first Michelin star in 2013 and the second in 2015. Avilles also owns a chain of restaurants in the capital and in the north, in Porto. He so skillfully creates variations with fish, meat, fruits and vegetables, that it is almost impossible to guess all the components of dishes and sauces. From the menu, you should definitely try mullet in liver sauce and popsicles. It is better to book a table in a few weeks (or even better – in 1-2 months) in advance. The prices on the menu are 150 euros or 90-120 euros à la carte. 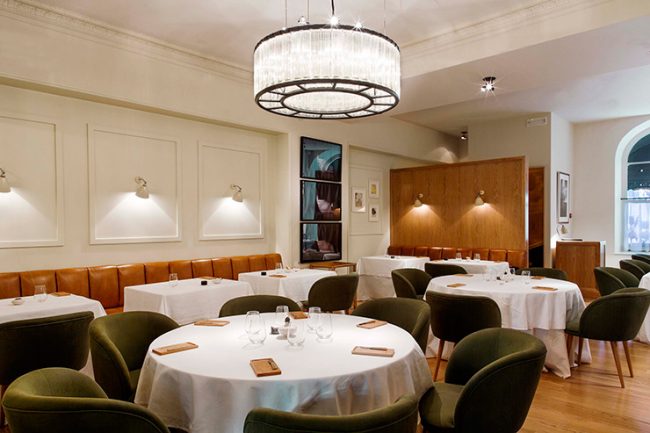 Restaurant Feitoria (Doca do Bom Sucesso, Altis Belem Hotel) opened in 2009 in the Belem area near the Tagus River. A favorite of local gourmets, chef Joao Rodriguez prefers seasonal products from the region, as well as traditional Portuguese cuisine, diluting it with exotic spices from the Far East and from Asia. For a greater impression, his assistants complete the preparation of many dishes on the tables of the guests. Indeed, a trip to Feitoria is like an entertaining show, where many surprises await the guests between the main dishes, for example snacks that reproduce the culinary map of Portugal, or a dessert that hangs from leaves of snow-covered banzai bushes, and when the meringues fall into the mouth, then from the nostrils of visitors , like fairy dragons, smoke begins to go. The restaurant has a vegetarian menu called Terra – Earth. The chef and his kitchen have been repeatedly awarded with numerous prizes, including the Michelin star. Two years ago, the International Academy of Gastronomy (IAG) awarded João Rodriguez the title of Chef of the Future (Chef d’Avenir). For a full culinary adventure, we advise you to try the signature six-course menu, which changes depending on the season. The price for the menu is 90-140 euros, à la carte – 75-90 euros. 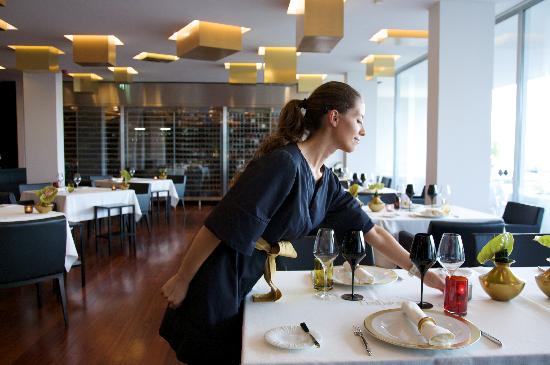 Another famous chef in Lisbon is Alexander Silva, who opened his own restaurant in 2015 Loco (R. Navegantes 53). In the lobby of the visitor, an “olive tree” meets – a symbol of nature and organic processes. The open kitchen has the size of a hall for visitors. Dishes are called “moments” here, and they are an integral part of two menus of 14 and 18 items. Many of the “moments” are not always served on plates. Sometimes the waiter may come up to the guest with the sentence: “Open your mouth and close your eyes.” And then he holds out a spoon and puts a “surprise” on the guest’s mouth. But the biggest surprise is that you never know which menu awaits you tomorrow. Silva has two new ideas this year. He invited well-known chefs to prepare a four-handed dinner, and also opened a special room (Loco I + D) in a restaurant where they study products and their qualities. The price for the menu without drinks is from 80 euros, from 70 euros à la carte. 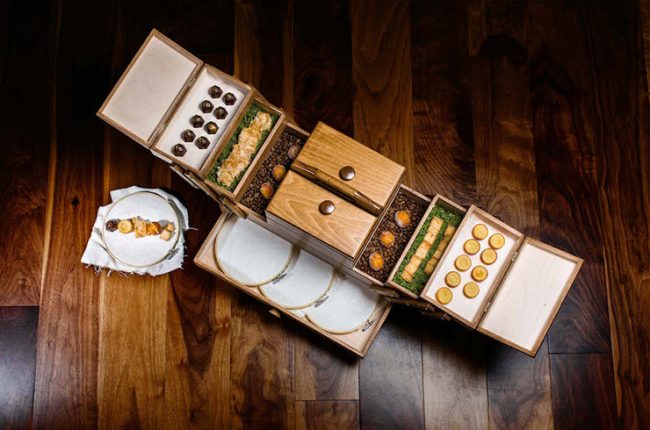 Enrique Sa Pessoa runs the Michelin-starred restaurant Alma (R. Anchieta 15), which has been open since 2009 and is housed in the building of the old Bertrand bookstore. The floor and walls, only slightly polished, retained their old structure. Only a few mirrors, tapestries and works of contemporary artists adorn this room of the XVIII century. Walnut chairs and tables are designed in a modern, functional style. Two halls have six tables, each of them has an overview of the kitchen and shelves with a collection of wines. Sa Pessoa cooks from the heart (“Alma” in Portuguese) and does not like shortcuts. For him, there is only good and bad cuisine. The first is determined by the quality of the product, the perfect execution technique and refined taste. Its restaurant is open for lunch and dinner. It offers two types of menus, among dishes – gazpacho from basil, foie gras with foamy sauce, fruits and vegetables and truly divine fruit and chocolate desserts. The price of the menu is 80-100 euros, 75-90 euros à la carte. 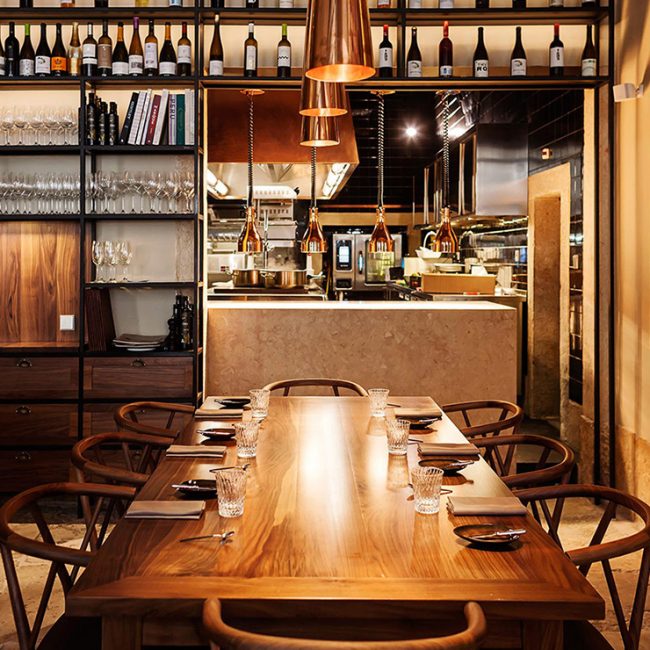 Where to have a delicious lunch in Lisbon

Among the gourmet restaurants, perhaps only Alma offers lunch. However, lunch at a restaurant ready to receive Michelin stars can be a great alternative. Varanda Hotels Four Seasons Ritz (also serves dinners). The atmosphere here is unusually pleasant, a bit nostalgic. After all, the building was built under the dictator Salazar. In winter, guests can sit in ceremonial rooms with heavy crystal chandeliers, artwork and Art Nouveau furniture. In summer, this pleasure is added to the opportunity to dine on the terrace overlooking the park of Edward VII. Named menus from the French chef Pascal Maynard skillfully combine dishes of fish and seafood, meat and vegetables, there is a wide selection of wines. For the sweet tooth, this restaurant is a real paradise. His desserts (especially chocolate and pralines) are considered the best in the city. The price for the menu is 100-150 euros. 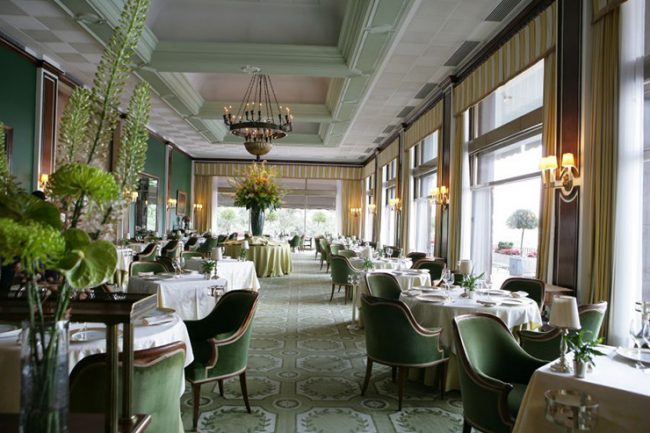 For meat delicacies and red wine it is better to go to a restaurant Rib beef & Wine Lisboa (Praça do Comércio, 31A), which is one of the best places in the city for lovers of wine and steaks from certified DOP meat (protected designation of origin). We recommend tasting Tomahawk Ribeye, Chateaubriand and RIB Eye branded steaks. Appetizers such as tomato soup, several types of freshly made sauces, fine red wines from the region and dessert (especially lemon sorbet) are served with steaks. The price of lunch without drinks – from 20 euros, dinner – from 35 euros. 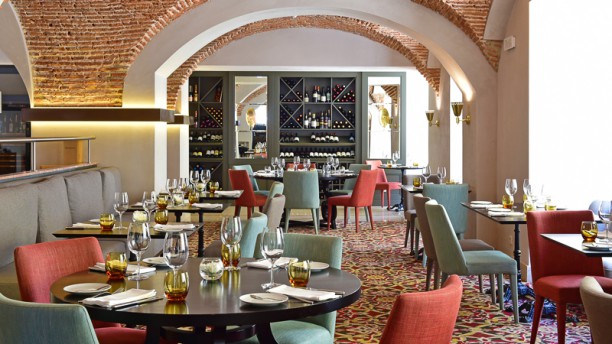 Where to eat in Lisbon

In the cult market Time Out Mercado da Ribeira (Av. 24 de Julho, 49) with its cozy stands, numerous small cafes and bars, you can find a good alternative to restaurants if you want a quick snack. There are also stands of the best chefs of Lisbon: Alexander Silva, Enrique Sa Pessoa, Vitor Claro and others, as well as well-known stores like Conserveira Nacional or Garrafeira. Arcádia still produces one of Portugal’s most famous and traditional chocolates, and Santini is not only the best ice cream brand in the country, but also one of the best in the world. 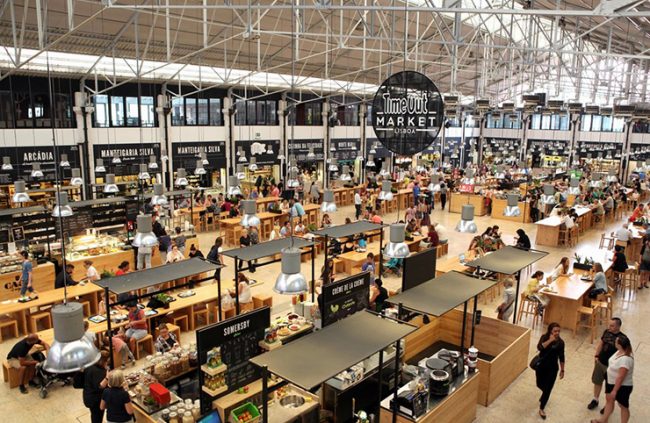 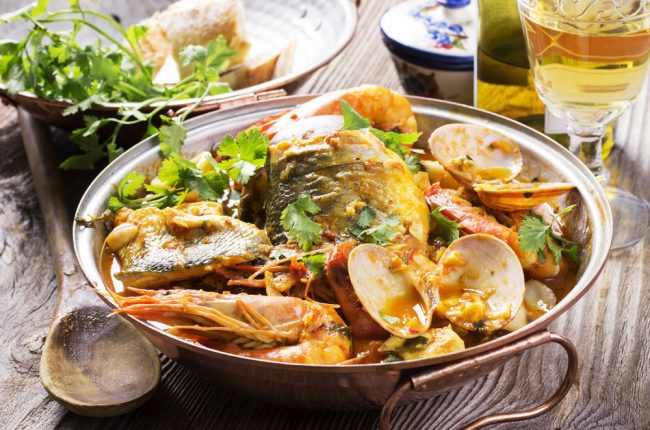 Having a cup of coffee will be a pleasure to sit in a coffee shop open since 1905 A Brasileira at 120 R. Garrett. The best chocolate croissants are made in a coffee shop. Cafe benard, right next door, on R. Garrett 104.

Lisbon is located on seven hills, and therefore, it is a city of beautiful views, whether it is tiled roofs and labyrinths of streets or the Tagus River and bridges connecting the bay with the Atlantic. We offer you to combine a review with a pleasant pastime in one of the restaurants, bars or clubs with a panoramic terrace.

This bar is located on the 10th floor of an 18th-century building that has now opened the H10 Duque de Loulé Boutique Hotel. The terrace offers views of the rooftops and the river. Cocktails here cost from 8-12 euros, snacks – 7-10 euros.

This club is considered one of the most exclusive in Lisbon. It offers a beautiful view of the castle of St. George and the bay, but to admire these views, you should reserve a table only on the terrace, and to get to the club at all, it is not enough to reserve a table, you must also dress elegantly in order to observe the evening dress code. There is also a Japanese restaurant, and steaks can also be ordered. Prices for drinks: champagne – from 80−150 euros per bottle, a bottle of wine will cost 30−40 euros, cocktails from 10−12 euros. 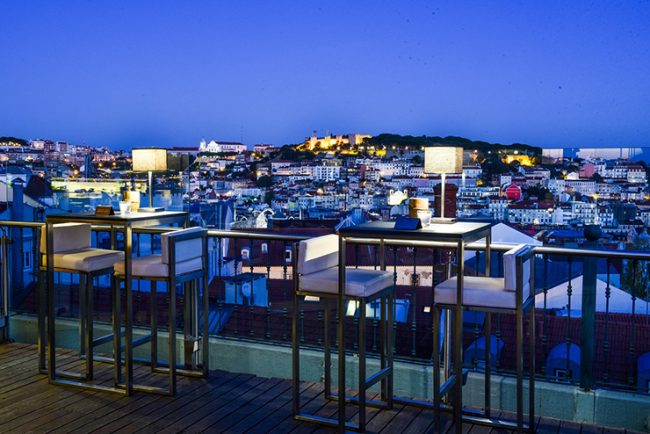 The bar is located on the roof of the parking lot in Bairro Alto, and it is not at all easy to find. But the dissatisfaction from the long searches is completely compensated by a cozy terrace with comfortable chairs, a panorama of the city and the opportunity to enjoy the sunset, as well as surprisingly modest prices. An aperitif costs from 4-5 euros, a carafe of wine – 15 euros, a cocktail – 8-10 euros.

Have a nice trip! Good luck!