Squid with tomatoes in the oven. Slowly stewed in the oven squid becomes incredibly soft, and tomatoes, giving juice, turn either into a sauce, or a side dish, or an integral part of this dish, certainly homemade, but so tasty and appetizing.

How to cook squid with tomatoes in the oven

Cut the squids on one side so that they open like a book, then cut them with a rhombus without cutting through, and then cut each into two equal parts. Paste the dried bread in a blender to get small crumbs – or just replace with breadcrumbs. Pour some olive oil into the bottom of the baking dish or pan, which can be put in the oven, put the squid in one layer, season with salt, black pepper and, if desired, ground chili. Sprinkle with half chopped garlic, evenly spread on top coarsely chopped peeled tomatoes, add the remaining garlic and cover with a layer of crackers.

Put the squid mold in the oven, heated to 220 degrees, and immediately reduce the temperature to 190 degrees. Bake the squid for an hour, occasionally glancing into the oven – let the majority of the liquid evaporate, but if you see that this process is too fast, cover the form with foil, if necessary, pouring a little water or white wine into it. When the squid is ready, first place the baked squid on the plates, then the tomatoes, pour the juices that have accumulated at the bottom of the form and generously sprinkle with finely chopped parsley leaves. Add a slice of lemon to each plate, and immediately serve the squid on the table. 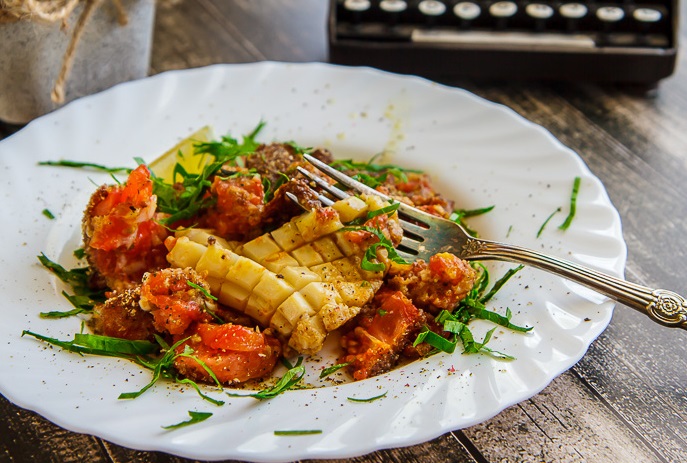