Delicate warm dough, sweet fragrant filling and soft cream melting in your mouth – it is impossible to resist a delicacy, the signature recipe of which was not disclosed. However, the recipe for cinnabon cinnamon rolls has become known to fans of this delicacy. Let’s try to cook it at home!

Since father and son Greg and Richard Comen decided to bake the most delicious bun in the world and founded the Cinnabon bakery network, 30 years have passed. Famous culinary experts kept their word, and cinnabon buns, with the light hand of the authoritative Mexican magazine Expansion Magazine, were included in the list of 50 most exquisite treats in the world.

How to Make Cinnabon Cinnamon Buns

1. We grow yeast in warm milk (plus add a little sugar (add from the initial 100 grams). While the yeast rises, beat the eggs in a separate bowl.
2. Add softened butter to the eggs (1/3 of the pack).
3. Add sugar to the egg-oil mixture (remaining from the initial 100 grams).
4. We mix yeast diluted in milk with a mixture of eggs, butter and sugar, mix thoroughly in a bowl, where in the future we will knead the dough.
5. Flour (600-700 grams (how much dough will take, actually) combine with salt.
6. Pour part of the mixture (flour and salt) into the yeast dough and knead it.
7. Make gluten (a teaspoon of flour + a teaspoon of water -> mix, mold the ball and rinse with cold water) and put the resulting ball in the dough, mix.
8. After adding gluten, add the remaining mixture of flour and salt, knead the dough. Cover the resulting ball with a towel and set in a warm place for an hour.
9. At this time, we do everything for the filling. In the microwave, soften the oil (7-10 seconds).
10. Combine Cinnamon and Cane Sugar.
11. We proceed to the “assembly”. It is necessary to roll the resulting dough, which should have already doubled, into a thin large layer, preferably rectangular (about 40 cm by 55 cm).
12. The melted butter is spread on the layer..
13. Sprinkle a layer of a mixture of cinnamon and cane sugar.
14. Roll the layer into a tight roll (the tighter, the better).
15. Cut the roll into kruglyash – cinnabons. You can cut with a knife or thread – thread is better.
16. The resulting cinnabons are placed in a baking dish, covered with baking paper and greased with butter. Put in the oven for 20-30 minutes at 175 degrees, until they turn golden; need sugar to dissolve).
17. While the cinnabons are baked, we make a cream – glaze. It is necessary to mix softened butter with cream cheese (any cream is suitable – Mascarpone or Almette (regular cream, without additives) and icing sugar.
18. After the buns are browned and ready, take them out of the oven and immediately cover with a creamy mixture (you can spread it with a brush, or you can pour it). At the end, garnish with grated chocolate or nuts as desired..

There are several nuances in cooking

Depending on the thickness of the roll, follow the baking time “by eye”, otherwise you can burn. They prepare very fast.
2) The amount of cream can be increased, because in Sinabon they are served well flooded. 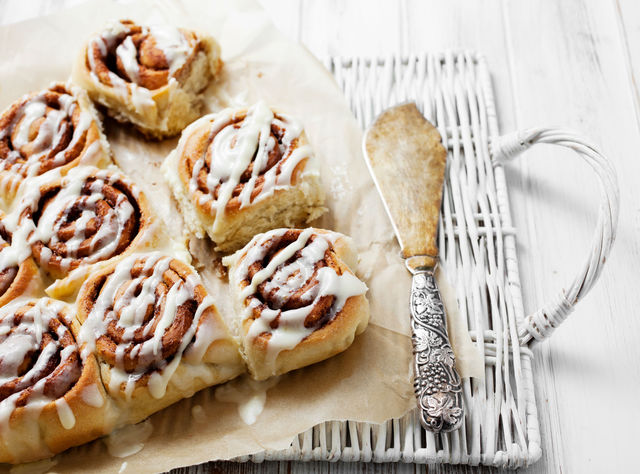 How to draw on your coffee