Raise the flag! Give the mooring lines! We are racing at full sail for a sea party.

Where does the holiday begin? Of course, with making a guest list. We call up friends, get together, think over the script. If you organize a holiday, such as a birthday, yourself, you can send an invitation to guests by mail. Wet the envelopes, tear them a little – this will give the invitation a shabby original look. 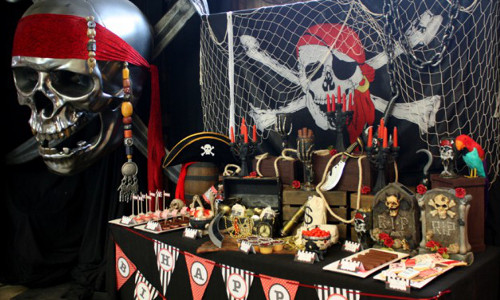 A pirate party is good because you don’t have to spend much on costumes. Indeed, sooner in each closet there are jeans shorts and a vest. To complete the image, put a bandana or a blindfold over your head, make war paint on your face. Finally, take a toy saber or gun from the children. 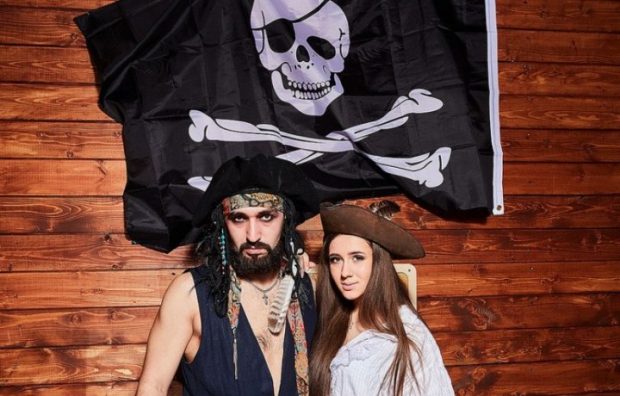 Men may not shave when they come to a party with a three-day sloppy stubble. And to become a real pirate, take a pipe in your mouth.

There is no need to prepare many dishes for the party. A buffet with a good selection of snacks mainly from seafood is suitable: shrimp, squid, crayfish, fish. The only drink at this party should be a traditional pirate rum. 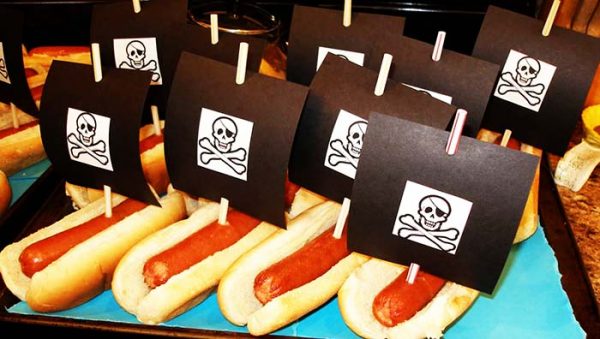 Decorate the room with a large canvas depicting a skull with crossbones, chests, fishing nets, rope ladders, coins. Do not worry too much about the details – better think over the scenario of a pirate party so that guests are not bored. There are really many entertainments and competitions in this area. The leader of the holiday can be in the image of Jack Sparrow. In principle, any well-known contest is easy to beat in a pirate theme. Here are some options:

This competition should be done first, and all guests should participate in it. Each is given a piece of paper with a pen, where you need to come up with your pirate nickname, because sea robbers are not accepted to address by name. After which the leader reads the nickname of each of the participants, now these names should be written on the badges and worn for the rest of the evening.

To continue the scenario of the party, take two or more basins, fill with water, throw any fruit to the bottom. The pirates are tied with a rope behind their backs, and kneeling, on command, they must get all the fruits with their teeth. Who will make faster and won.

Fill two identical containers with any drink. At the signal of the host, the participants begin to drink their “rum” with the help of tubes. Whoever manages to drain the tank faster, he won.

All pirates love to search for treasures, so the final contest of the party script is “Treasure Search”.

Hide the treasure trove with prizes in a place where it will be difficult to find. Write a riddle, and the answer must be the place or object where the next question is hidden. Enough 4-5 puzzles – the latter will lead to treasure. If the pirates do not cope with any task, then they come up with a task (to dance, to sing a song about the Motherland, in general – everything that comes to mind).

As prizes for the competitions you can buy pirate-themed souvenirs. For example: T-shirts, badges, magnets, circles. The scenario needs to be thought out in advance, then the pirate party will undoubtedly go off with a bang! Of course, everything is accompanied by a fun banquet with a disco.