First of all, we take care of the situation in the apartment or house. According to the scenario, you can decorate the walls with images of wanted criminals. Here the owner is given freedom of action – you can even print a photo of the guests, providing them with caustic comments. So the party for the present gangsters will begin in the hallway. A great impression will be made by an improvised bar counter, which can be decorated in a room or in the kitchen. And you should not forget about standard jewelry in the form of garlands and balloons – they will contribute to the creation of a festive atmosphere.

Costumes and accessories for a gangster party

What a party without costumes, especially themed? During the stagnation period in America, strict suits, trousers with straps were in fashion, and all this in dark colors (crimson jackets do not fit – these are the realities of the gangster era of the 90s). You can get wide-brimmed hats, put sunglasses on your nose. Women’s toilet should be brighter. For example, old-fashioned evening dresses, elaborate boas and scarves from accessories. Pondering the scenario, it will not hurt to get acquainted with what makeup was in fashion in the 20s-30s. Bright red lipstick immediately comes to mind, like Hollywood actresses. 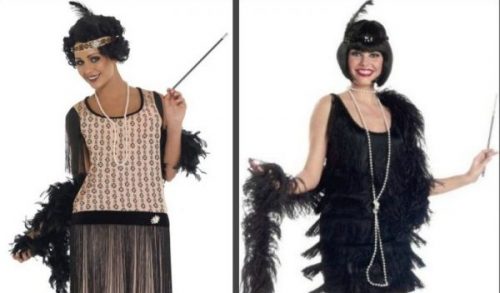 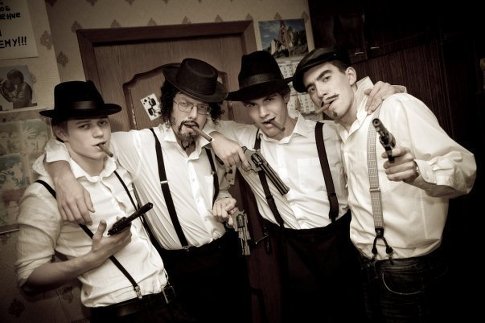 The script for a gangster party is nothing without thoughtful contests. They should be strictly “in the subject”, highlight the event from the general series. What is the main attribute of the gangster era about which films are made and are still remembered? This is the famous dry law, which led to an extraordinary flowering of home brewing..

At the party you can organize the game “Outsmart Prohibition.” Participants are selected, and it should be both women and men. We immediately discard the teetotalers. Each gangster is given a glass of liquid – water or vodka – which they must drink through a straw, not showing what exactly they got. According to the scenario, only one glass is filled with vodka, and the task of observers is to guess who exactly it got. In the end, it should be clear that each container was filled with alcohol..

Another original script of the contest is “a secluded place”. Here, the participants are divided into pairs, each consisting of a man and a woman. The participants have twenty banknotes in their hands, which they must hide on the body of their partner, with one banknote in one place. The winner is the team that was able to put all the papers in a secluded place faster than others.

The theme of the gangster party will be a contest during which the most accurate of those present will be determined. If in the presence of there are children’s pneumatic pistols – fine. Otherwise, you can do with darts. Each guest takes turns throwing darts at a target from a distance of three meters. Gradually filtering out the least apt, the two best gangsters converge in the final. As a reward to the best-known party hero, present a solid bundle of fake dollar bills.

As you can see, the gangster party script is very simple. The organizers only need to show imagination, and strong drinks and cheerful guests will do the rest