Every day more and more guys, as well as girls, want to look stylish, fashionable, cool. The hairstyle conveys mood and state of mind, tells others: “Better not come near me, I’m aggressive and angry” or vice versa: “I’m sleazy and lazy, I don’t care how I look”.

Its class of society has its own hairstyle. So office workers will not shave whiskey and grow mohawk, and gop-stoppers will never make a stylish hairstyle a la Elvis Presley. But the statistics are happy, today the ranks of stylish guys are replenishing.

Do not forget that only clean and well-groomed hair will make any hairstyle truly stylish..

Strict classic hairstyles also belong to the category of fashionable, if properly laid. 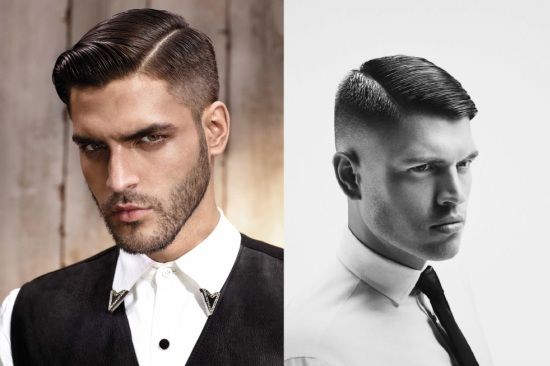 Fashionable styling of this hairstyle varies in bang:

– with a parting and a raised wave of bangs;

– with parting and smooth bangs.

In order to do such a styling, you need an ordinary “classic” haircut. In order for the hair to lie correctly and hold for a long time, special styling products will be required. It can be both mousses and gels. Their main difference is that after drying, the gel remains more noticeable on the hair, and the mousse is practically invisible. Therefore, if you do not want to be declassified, apply the styling gel as thinly as possible.. 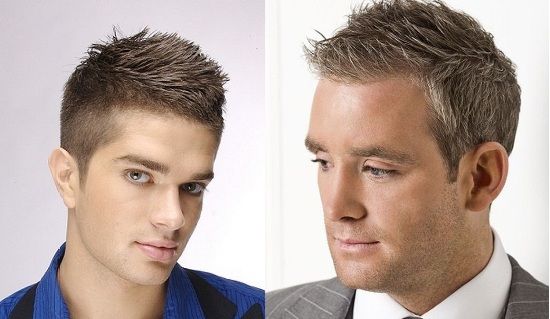 Hair raised with gel or mousse looks cool and restrained at the same time. A neat classic haircut gives you the opportunity not to become a freak among ordinary people, and stylish styling will give a special charm to an unusual look. 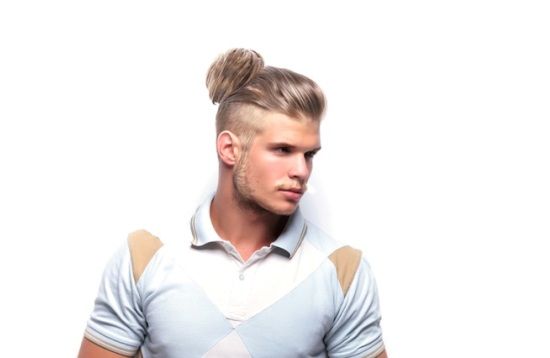 This is an unusually stylish hairstyle. The upper part of the hair grows to any length, and the temples, behind the ear and the back of the head, are cut under the clipper with the smallest nozzle. Long hair is tied in a ponytail or braided. It happens that the braids manage to braid several pieces at once, as in the photo below. 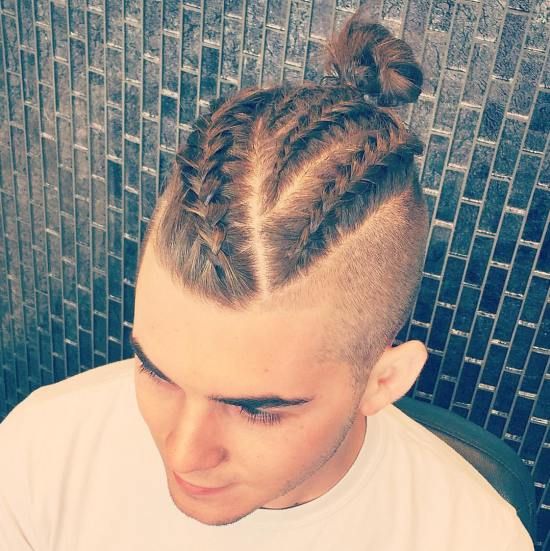 You can do this hairstyle yourself. Divide the hair into three or more strips and braid each separately with a pigtail. On the back of the head, tie the loose ends of the braids into a tight tail.

You can also let one pigtail along the border between long and short hair. It is braided from part of long hair and tied in a ponytail on the back of the head along with the total mass. This transition looks stylish.

This is the same haircut, only the hair, in comparison with the first option, is loose. Laying is best done with a gel or mousse in order to give the required volume. Hair is combed on one side, exposing the shaved part of the head.

It became fashionable for guys to dye their hair. Hairstyles of this style will look even more unusual when the hair on the head and beard will radically vary in color. For example, on the head there will be an ashen blond, and on a beard dark chocolate. This combination looks very cool and strong.

Hairstyles, called the word unisex, belong to universal hairstyles, which are often preferred by representatives of both sexes. 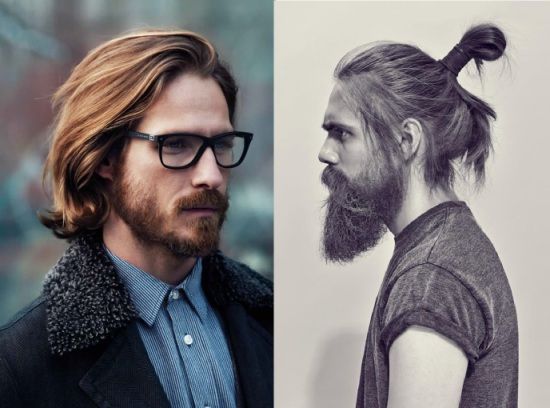 Such universal hairstyles for long hair look beautiful both on women and on guys. The main condition for a beautiful hairstyle for guys here is the lack of bangs. It will be better if the hair is combed back. 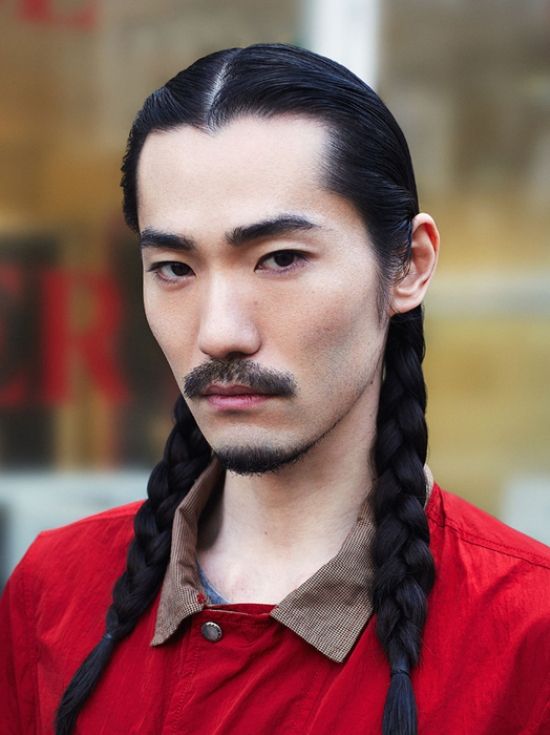 The hairstyle has ceased to be either female or male, the line is blurred. A guy who braids two long braids for himself should not be condemned by society. Only a truly stylish and confident man can make such a hairstyle..

To braid, you must have the skill. Braiding your braid yourself is even more difficult, but if you train often, it will turn out better and better every day.

Stylishly made drawing of shaved areas on the head gives guys confidence and a share of brutality.

Patterns at the temples

With this kind of hairstyle, the hair of the bangs, crown, and from the back of the head to the neck remains long, and the temples and the area behind the ears are cut with a clipper. The smallest or penultimate nozzle is used. A pattern is made on this area with the same machine, but already without a nozzle. Some hair in the figure is trimmed with scissors.

The remaining long hair grows to a certain length. It can be completely painted in any color, or just the ends. If desired, it can be braided in a braid or laid in any type of hairstyle, such as a mohawk. 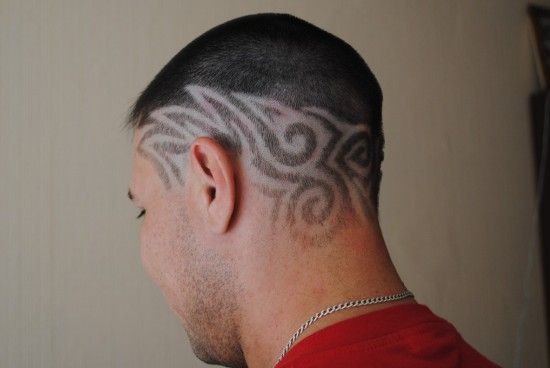 These patterns cover the head in a semicircle, passing from one ear along the back of the head to the other ear. The pattern can be varied, but most often they choose strict geometric patterns. The hair on the crown can be either very long or very short.

Patterns all over the head 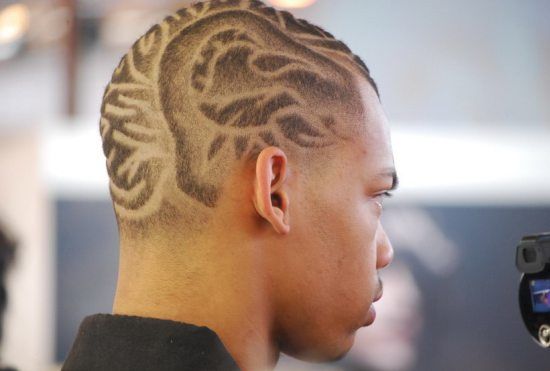 These hairstyles make themselves very confident guys who for a minute do not doubt their attractiveness. The head is completely covered with a pattern, and the hair has different lengths along the line of the pattern and at a distance from it. If you look closely, it will become clear that in order to create a darkening effect, the hairdresser leaves part of the hair longer than the rest. This hairstyle can be deservedly called a cool hairstyle for guys.

The options for the drawings do not count. It can be both animals of all stripes, and complex geometric shapes, people, nature, individual objects, the list goes on and on.