Pork belly with fennel. Thanks to the cuts in the form of a grid on the surface of the brisket, the spices penetrate deeper, and the addition of salt after roasting makes the crust even crispier.

How to cook pork belly with fennel

Heat the oven to 180 C. With a sharp knife, apply a diagonal grid with 1.5 cm cells on the surface of the brisket. Rub the surface with salt and pepper.
Peel the fennel, cut into large plates. Peel and crush the garlic with a knife. In a large frying pan, heat the oil, put fennel, bay leaf, garlic, cardamom, anise and half the dill seeds. Heat until fragrance. Slide the seasoning mixture to the rim, place the brisket in the form with the skin down and fry for at least 5 minutes until golden brown. Turn the brisket over, salt the skin again, sprinkle with the remaining dill seeds.
Put the brisket in a baking dish with spices, pour the wine around a piece of brisket to the level of a layer of fat directly under the skin. Put the pan in the oven, bake for 2.5 hours. Serve with baked potatoes or mashed potatoes.
For the sauce, pour the liquid from the baked brisket (along with fennel) into a saucepan, add mustard and let the sauce boil for a few minutes, add salt to taste. Remove anise and cardamom, serve meat sauce. 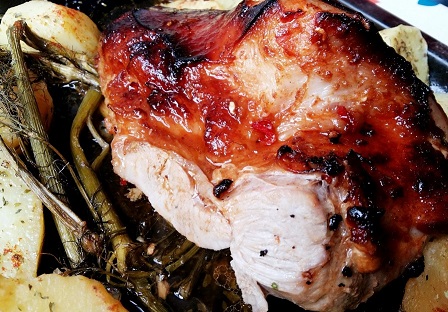