Medicine now has many tools for treating various diseases. However, science knows very little about such a rare pathology as Vitiligo disease. To understand what this phenomenon is, you need to understand the features of the manifestation of the disease and the causes of its occurrence. Visually, vitiligo looks like a violation of pigmentation, which is characterized by the formation of bleached spots on the skin. This property of the disease is called depigmentation – the disappearance of the pigment melanin from certain areas of the skin. Let’s see what vitiligo is and how to cure it.? 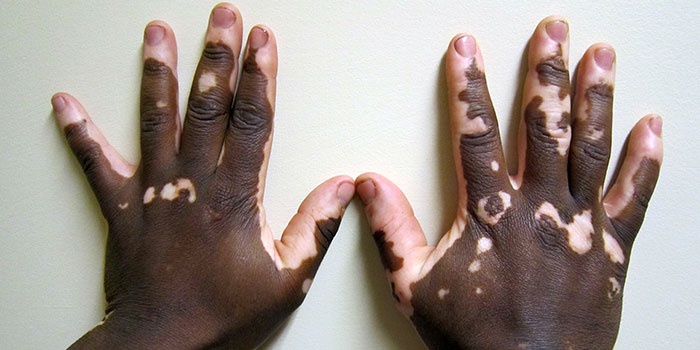 Science knows neither the exact causes, nor the mechanism of development of vitiligo. There is an assumption that the appearance of vitiligo disease can be explained by the following factors:

Some experts believe that factors provoking other autoimmune skin diseases contribute to the development of vitiligo: immune disorders, combined with injuries, inflammatory and necrotic lesions of the skin, intoxication, and the infectious process. The occurrence of vitiligo disease is also associated with parasitic infections, an imbalance in the minerals, vitamins, deficiency of iron, copper, selenium and zinc.

The main manifestation of the disease is white spots on the body. Foci of the disease can occur at any age, often in childhood and adolescence, can form in all areas of the skin. Those places where the skin is most injured are most at risk of the appearance of depigmented areas – spots occur on the legs, knees, hands, elbows. 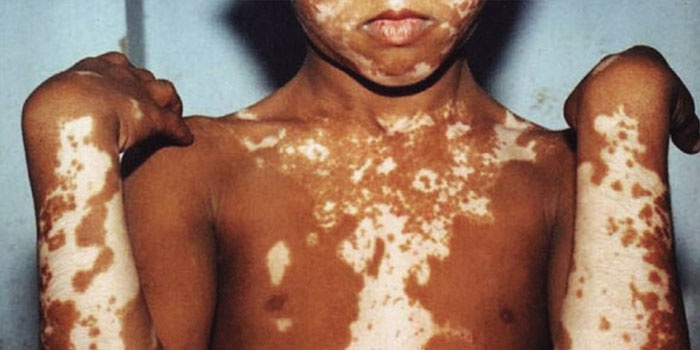 In the foci of vitiligo, sweating is disturbed, the skin becomes unable to respond normally to cold and heat. The hair on the whitened parts of the body in many patients also bleaches. Individual spots can disappear spontaneously even without treatment, but with the progression of the disease, foci of depigmentation can form at the sites of recent injuries, friction or pressure on the skin.

The initial stage of vitiligo is very weakly expressed. It is characterized by minor foci of depigmentation – small spots that look like a noticeable, but not particularly eye-catching cosmetic defect that is easy to mask with clothing. Gradually, bright spots on the skin enlarge and combine, forming large areas of milky white color..

Vitiligo disease does not cause any disturbing symptoms, it is not contagious, but it is difficult to cure. Vitiligo is perceived by patients as a serious aesthetic defect, so the disease can cause severe psychological discomfort. After tanning, the colorless areas become very noticeable, the affected areas of the skin are very sensitive to ultraviolet and quickly “burn out”.

Experts diagnose vitiligo on the basis of the existing clinical picture, examining the characteristic foci of depigmentation – white spots on the arms, legs, trunk. When making a diagnosis, difficulties almost never arise, it is more difficult to reliably detect the causes of Vitiligo disease. If the dermatologist is not sure of the diagnosis and suspects other skin pathologies (lichen, psoriasis, neurodermatitis), the patient is referred for additional examinations.

A variety of factors contribute to the onset of the disease, so its treatment requires an integrated approach. However, dermatologists do not yet have a clear scheme and reliable methods for treating vitiligo and stain removal. Most therapeutic measures are aimed at preventing the progression of the disease and reducing depigmented lesions on the skin.. 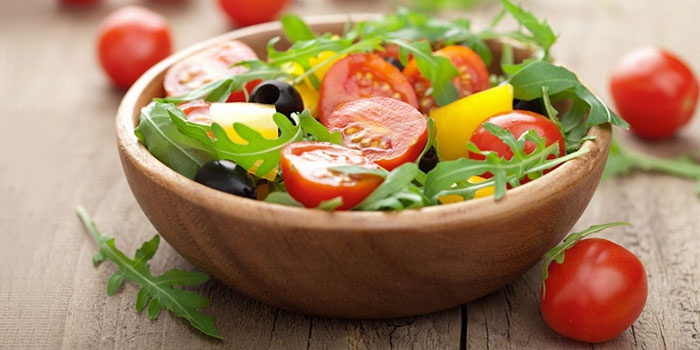 Vitiligo disease develops under the influence of metabolic disorders, and therefore, a special diet is an important condition for its successful treatment and getting rid of spots. The patient needs to eat, observing the following rules: 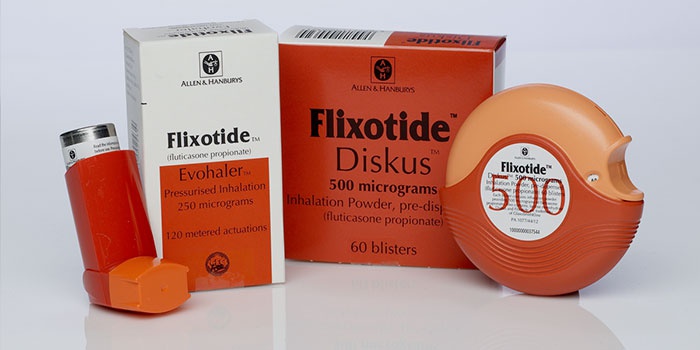 The following ointments, creams, gels and lotions are used as local preparations for the treatment of Vitiligo disease:

For hormonal treatment of vitiligo, potent corticosteroid drugs, such as Fluticasone and Flixotide, are used. They are used continuously for three months (once a day) or six months intermittently: for 15 days, the product is applied to vitiligo spots, followed by a 15-day break, and this is repeated six times for six months.

To stimulate the synthesis of melanocytes (skin pigment cells) in case of illness, a lotion of vitiligo stains “Melagenin” is prescribed. The solution is applied to depigmented areas of the skin once a day, using until the desired therapeutic effect is obtained. If necessary, take short breaks in treatment. Remedies for vitiligo based on calcineurin inhibitors (Elidel, Protopic) are used twice a day for six months. 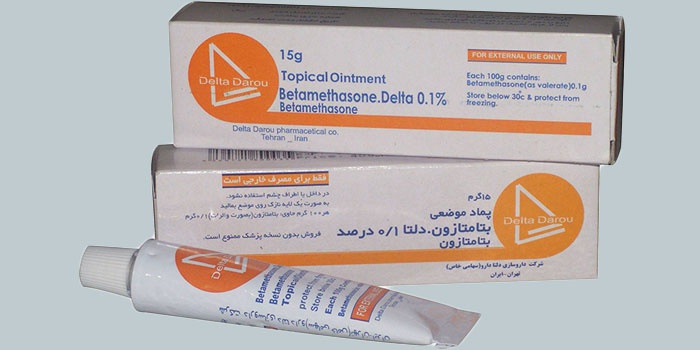 Vitiligo disease requires an individual approach when prescribing systemic drugs. In the complex treatment of the disease, the following groups of medicines can be used: 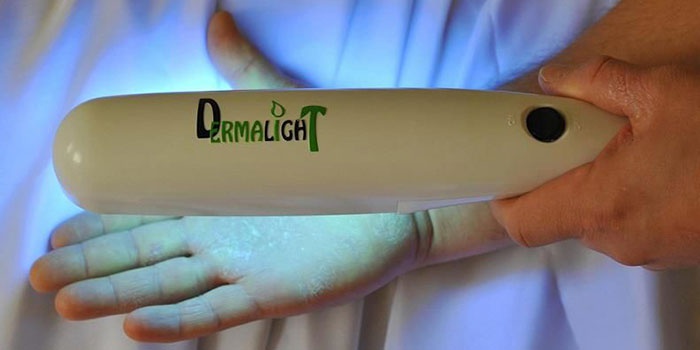 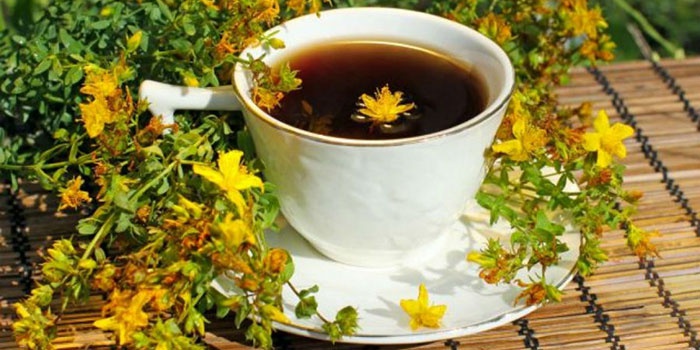 After trying different methods of treating the disease and never finding how to get rid of white spots on the body, patients often use unconventional drugs. Traditional medicine includes many home recipes that are good for vitiligo. The most effective are the following: 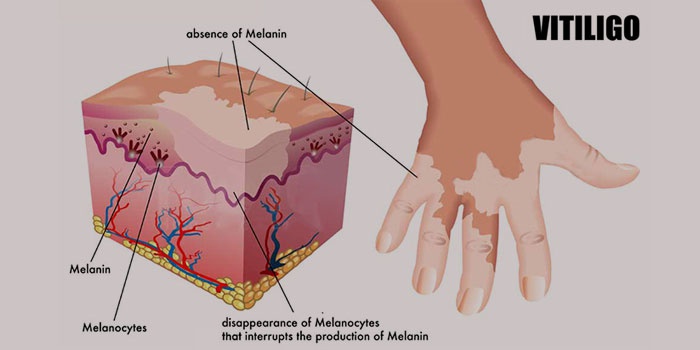 There are several time-tested and innovative methods of surgical treatment of vitiligo, however, all of them have contraindications and do not guarantee the complete elimination of the disease. Skin operations require modern high-tech equipment, so the most effective of them require treatment in Moscow or in foreign clinics. Surgical intervention for vitiligo may be as follows:

How to treat vitiligo in children 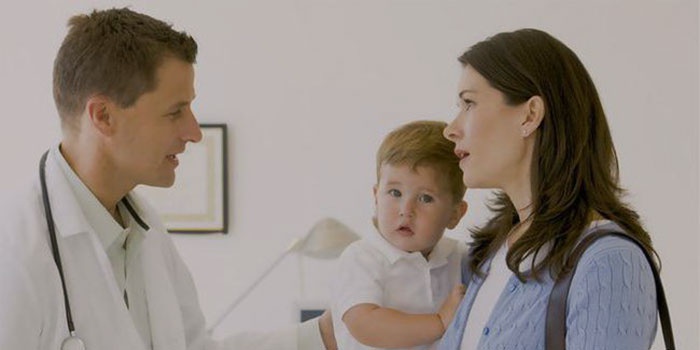 Almost all methods prescribed by adults are used to treat a disease in a child. The exception is systemic therapy with hormonal drugs. It is used only in the presence of strict indications, for a minimum time and at the lowest therapeutic doses. Children under 12 years of age are contraindicated in sessions of UV irradiation of the skin and PUVA therapy.

According to the famous pediatrician, in the treatment of this disease it is important to take care of the psychological state of the child. If peers tease him, and ill-mannered people constantly consider spots on the skin, you need to try to find the child to communicate with other people suffering from vitiligo – this will help him overcome emotional problems.

After a successful recovery from vitiligo, it is important to follow preventive measures that will prevent the disease from returning:

Photos before and after skin disease treatment

You can understand how the skin condition can improve as a result of vitiligo treatment by looking at the photos of people before and after treating the disease. Placed below are pictures of skin areas affected by vitiligo that will give you the opportunity to approximately evaluate the effectiveness of therapy and help determine the strategy for combating this poorly understood disease. 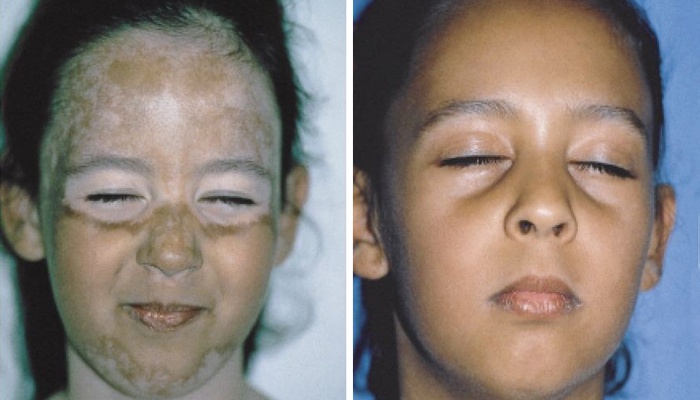 Maria, 27 years old: For the first time I had such spots on my back, and then on the feet and hands, even when I was just a child. I was injected intramuscularly with vitamins B, given iron preparations. The disease stopped, and the second time began to progress a little about six months after pregnancy, but nothing happened. Now the spots on the skin began to grow again, while vitamins with selenium and copper sulfate were prescribed for 2 months of treatment. I’ll see if there will be improvements.

Elena, 19 years old: When white spots appeared on the skin, my mother immediately led me to the doctors. They were treated with injections, pills, then phototherapy. A few months later they said that there was no progress in vitiligo, and everything was fine. For prevention, some minerals and vitamins were also given in courses. Since then, nothing has appeared. I was told that maybe there will never be these spots on the skin again, because the disease was cured in time.

Eugenia, 23 years old: Vitiligo appeared after a course of injections of antibiotics. The dermatologist did not prescribe anything, he said that there was no treatment. I had to look for a normal doctor, went through a bunch of examinations and tests, finally prescribed treatment – vitamins, copper preparations and compresses for stains with Ammifurin. While there is no progress of the disease, but the spots on the skin remain, and I can’t reduce them in any way.