Turkey roll. Turkey is not only healthy, but also tasty meat. Tasty, juicy and at the same time healthy roll will be appropriate both on the festive and on the everyday table.

How to make turkey roll

Place the turkey breast fillet on a cutting board with the flat side down. Holding the knife parallel to the board, make an incision at the site of thickening of the breast, not reaching about 1 cm to the edge of the meat, then open the meat like a book and slightly flatten the fillet with your palm to get a large piece of approximately the same thickness. Attach a piece of thigh fillet close to the breast fillet, if necessary also notching and flattening it. Your goal is a large flat rectangle made up of two pieces of fillet.
If desired, you can replace the thigh fillet with turkey breast fillet

Put salt, black peppercorns, fennel seeds, garlic and sage and rosemary leaves in a blender bowl, add a little dried chili if desired and chop until smooth. Make shallow cuts on the surface of the fillet rectangle, grate it with spicy paste and roll it into a tight roll, starting with the thigh fillet, so that the red meat is inside the roll. Tie the roll with twine in several places so that it holds its shape, then fry the turkey roll in butter on all sides until golden brown, lay it on a baking sheet, cover with foil and bake at a temperature of 150 degrees. After an hour, begin to measure the temperature in the middle of the roll with a meat thermometer, and as soon as it reaches 65 degrees, remove the roll from the oven and let it rest for another 10 minutes. If you don’t have a thermometer, then pierce the roll with a fork if transparent meat juice stands out then the meat is ready.
Remove the twine, cut the turkey roll in even portions and serve with a green salad and your favorite sauce. 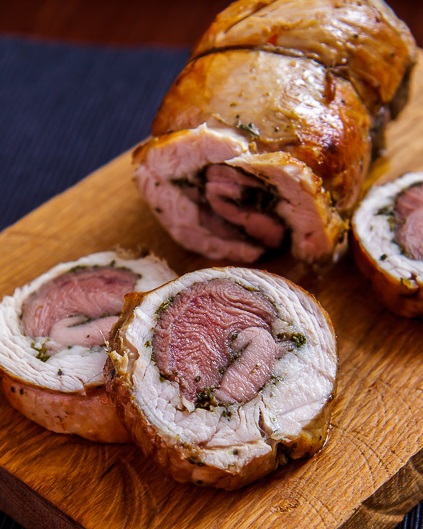