In real life, people with perfect features are rare. If you want to get closer to the standard of beauty, ownership of makeup secrets will help you a lot, which will help to correct facial features and create visual harmony..

Correction of various types of face

There are several basic types of faces that can be corrected with the right makeup technique to create a flawless look.. 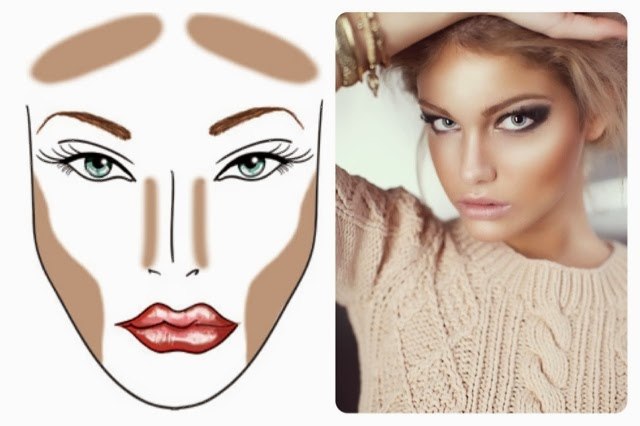 In order to determine the type of face and skillfully correct the wrong features using cosmetics, you must first go to the mirror and determine what type your face can be attributed to: oval, round, square, rectangular, triangular, trapezoidal or diamond-shaped.

A round face is characterized by a weakly expressed chin and the same horizontal and vertical proportions. The main task of correction, thus, becomes the “lengthening” of the face and a visual reduction in the volume of the cheeks. To do this, darken the side surfaces of the face with blushes of a natural brown shade.

It is advisable that closer to the chin the color of the blush becomes more saturated. The tip of the chin can be brightened with powder of the lightest shade. To enhance the effect of narrowing the face should be applied to the cheekbones main blush in the form of a triangle, elongated to the corners of the mouth.

A square face is characterized by the same width and length of the face, pronounced angles of the lower jaw. In this case, the purpose of the correction is to “facilitate” the lower part of the face, smooth the angular shapes and visually narrow the face.

Additional blush and shades of a natural shade can “soften” the rectangular shape of the forehead and lower jaw. The main blush is applied to the cheekbones in the shape of a triangle extended to the temples.

A rectangular face is characterized by a significant predominance of vertical sizes over horizontal and pronounced outlines of the lower jaw. The purpose of the correction is to visually expand the face by highlighting the side surfaces with light powder and applying the main blush in the form of feathery ovals on the middle part of the cheeks.

The diagram shows a rectangular face with proportional features. With this type, a high forehead and / or an elongated chin are often found. In this case, the vertical size can be visually reduced by darkening the chin and the upper part of the forehead with blush..

A triangular face is characterized by a pronounced sharp chin. The purpose of correction is to balance the upper (wide) part of the face with a narrower lower.

To do this, darken the temporal region of the forehead and frontal tubercles with additional blushes, and then the sharp chin, highlighting the lines of the lower jaw. The main blush is applied just above the cheekbones on the protruding part in the form of a rhombus.

The trapezoidal face has a heavy lower jaw. The upper part of the face gives the impression of “narrowed”. Using correction, you can visually reduce the volume of the lower part and the expansion in the temporal region.

To do this, darken the lower jaw with additional blushes, and apply the main blush on the cheekbones in the form of a rectangle, shaded to the temples.