A person gives a lot of physical and emotional discomfort of eczema on his hands (weeping lichen). This disease is characterized by inflammation of the skin on the hands with the formation of vesicles, which subsequently burst and can turn into pustules. Eczema causes unbearable itching and has a relapsing character. What leads to the development of this disease? What are the effective methods of treating eczema on the fingers, palms?

Causes of eczema on the hands 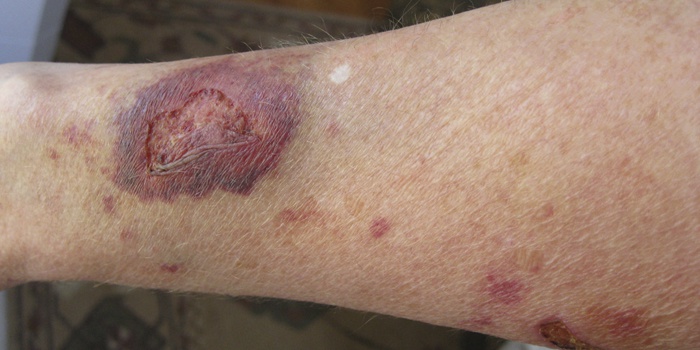 Every 4th patient visiting a dermatologist is diagnosed with eczema. This disease can affect different parts of the body (face, feet, etc.) and appears in people of different ages, lifestyles, and sex. The reasons for the development of eczema on the hands, fingers are completely unclear. However, doctors identify a number of factors that can lead to the occurrence of lichen. The type of eczema depends on the factor that triggered the disease. Soaking lichen is classified into the following types: seborrheic, microbial, occupational, pediatric, true, dry, callous, atopic eczema. There are two phases of the course of this disease: chronic, acute. Depending on the type of disease, the doctor prescribes treatment. Consider what signs have common different types of eczema in the area of ​​the hands:

Symptoms and signs of the disease

The first signs of eczema on the hands, fingers becomes itching and redness. The next stage in the development of this disease is dense edema. Then there are many small vesicles with serous content. At this stage, patients often suffer from fever, burning, severe itching. Well, if this makes a person sign up for a doctor, then the subsequent phases of development can be avoided..

A further phase in the development of eczema is the appearance of cracks in weeping areas at the sites of inflammation. If at this stage of the disease an infection gets into the skin affected by weeping deprivation, the disease will take on a more complex form. In this case, vesicles filled with pus may appear. When they burst, erosion of a weeping type with an unpleasant odor appears in their place.

How to treat eczema 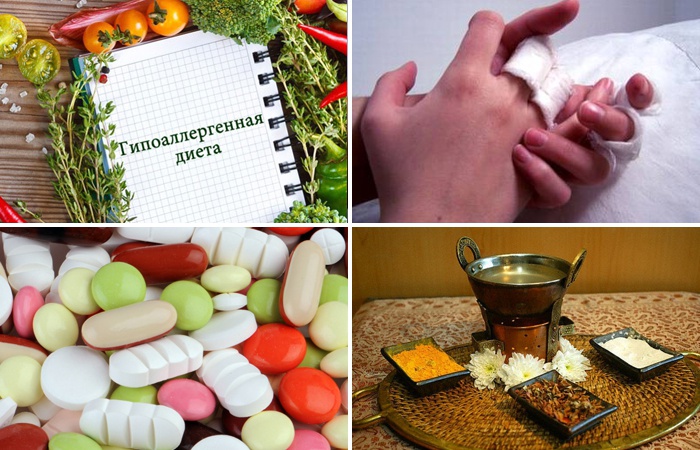 If eczema symptoms occur, you should consult a good dermatologist for advice. After the examination, the doctor will decide which examination to take and what preparations to treat this skin disease. How to cure eczema on the hands? To get rid of weeping lichen, doctors recommend a comprehensive approach that includes the use of certain medications and lifestyle changes. Drug treatment should occur in parallel with the following conditions:

It is important for patients with eczema to exclude products from the diet that can cause allergic reactions. Such people are not recommended to include eggs, smoked meats, canned goods, too salty foods, spices, alcoholic beverages in the menu. Patients with weeping lichen need to limit the consumption of animal fats, which are found, for example, in beef, pork, cheeses. The diet must be designed so that vitamins B and C enter the body in sufficient quantities.

To get rid of lichen, external methods of treatment are used. It can be lotions, baths, antiseptic, hormonal ointments from eczema on the hands. Often, doctors for topical administration prescribe corticosteroids in creams or pastes. These ointments from weeping lichen have a strong anti-inflammatory effect, which helps to accelerate wound healing. But it is necessary to use hormonal drugs and creams from eczema on the hands as directed by a doctor to minimize the risk of side effects from these drugs.

In the acute form of weeping lichen lotions with boric acid, silver nitrate, dimexide effectively help. It is recommended to treat the skin during the bursting of vesicles with salicylic, boric ointment, diprosalik solution, and baths with potassium permanganate solution will facilitate the patient’s condition in this phase of the disease. Care for affected skin must be gentle.

If local methods of treating eczema do not give results, then the doctor will prescribe the intake of medications inside. These can be antihistamines to relieve allergic manifestations, immunosuppressants, corticosteroids, cytostatics. If an infectious component is added to the manifestations of weeping lichen, then the doctor will prescribe antibacterial therapy to the patient.

In parallel with drug treatment, baths, lotions, decoctions from plants can be used to combat eczema. Such natural remedies do not have side effects and are able to alleviate the condition of the patient, speed up recovery. Before using any folk remedies, it is advisable to consult a doctor. The following are some effective alternative methods for treating weeping lichen on the hands:

To prevent the development of weeping lichen in the area of ​​the hands or to eliminate the likelihood of relapse, you need to lead a healthy lifestyle (do not smoke, do not drink alcohol), protect yourself from the risk of chronic stress due to lack of sleep and excessive stress, monitor your health, eliminating allergic reactions in time and infectious diseases. Do not get involved in cleansing cosmetic procedures so as not to disrupt the protective function of the skin. Under stress, drink natural sedatives.

What does the initial stage of eczema look like – photo

The development of eczema on the fingers and hands lasts from several days to months. The onset of weeping lichen is characterized by the appearance of redness, swelling, itching on the skin of the hands. It is important to start treatment at the first signs of the disease in order to prevent the transition of eczema into a chronic disease. What the weeping lichen looks like at the initial stage is shown in the photographs below.. 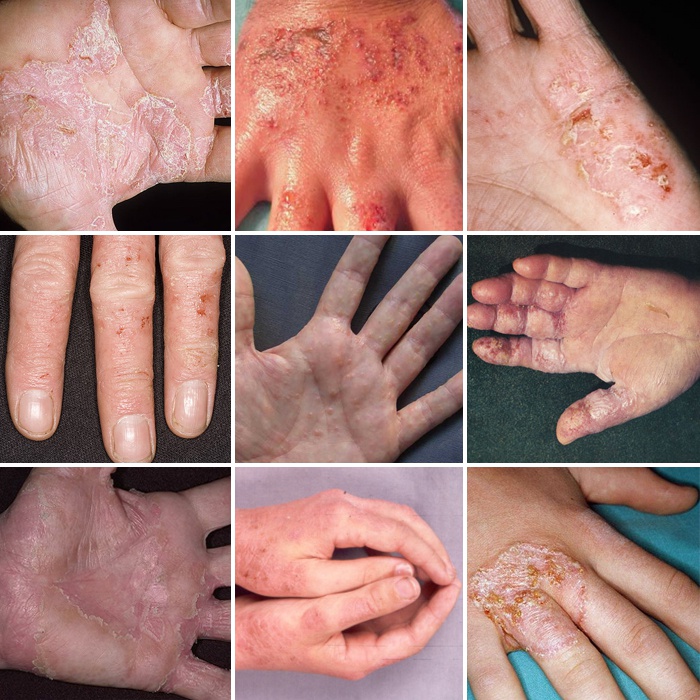